Last Friday, many popular internet sites were taken down or slowed to a crawl by a cyber attack.

This attack used a new type of malware that takes control of millions of devices connected to the internet — including routers, baby monitors, and cameras — without their owners’ knowledge.

The attack was aimed at a New Hampshire tech company called Dyn, likely because they route and optimize traffic for a who’s who list of major internet companies like Airbnb, Etsy, Spotify, and Twitter, as well as popular news sites like The New York Times, The Financial Times and CNBC.com.

The infected devices were turned into a virtual army that worked together to overwhelm Dyn’s systems with junk traffic, crippling access to their clients’ sites for several hours. The FBI and the Department of Homeland Security are investigating the attack.

Want to learn more about printer security? Experts from HP are always on call. Email us.

Cyber crime, internal breaches, compliance infringement, and more can hurt your business, and while most IT departments do a good job of protecting their PCs, they are effectively leaving their back door open by not protecting their printer fleet.

It all adds up to financial loss  : 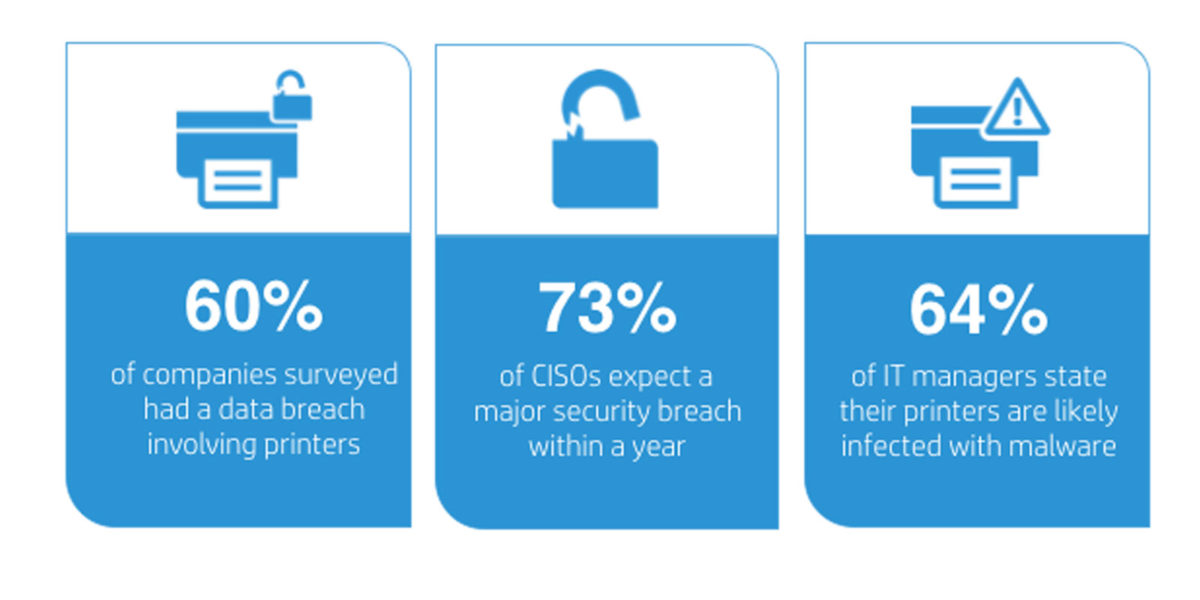 The latest generation of HP Enterprise printers are unique in the marketplace because they offer three key technologies together designed to thwart attackers’ efforts and self-heal. These features automatically trigger a reboot in the event of an attack or anomaly.

There’s no need for IT to intervene. Administrators can be notified via Security Information and Event Management (SIEM) tools such as ArcSight.

[Tweet “47% of IT managers don’t realize printers are vulnerable to cyber crime.”]

3 Steps to a Secure Device

We’re one of the largest independent HP resellers in the Midwest, and we’d love a chance to show you why. Email us today.