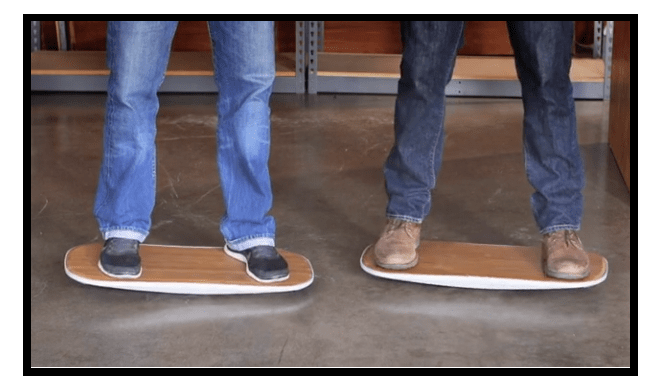 For those whom even a treadmill desk isn’t enough, I offer the surfing desk…

You hear it a lot these days: all the sitting you do at work is killing you. Sitting is the new smoking, they say. In fact, this push to get people off their rear ends led to the increased use of standing desks. For some, though, merely standing isn’t enough. One of those folks is Joel Heath.

His standing desk wasn’t working out, “I started experiencing pain in different places,” he told Fast Company. “I just felt like there had to be a better way. I started to play with the idea that if you put a subtle rocker under the foot, you could move out of a sedentary state.”

Twenty-seven prototypes later, Heath emerged with The Level, a surfboard-like platform that requires the user to constantly make small movements with their feet to stay upright.

It sounds like torture to me, but the company that makes them commissioned research from the Heeluxe Testing Lab in California who found that there is some benefit to using The Level. You would get a 15% increase in your heart rate vs. sitting. I would have thought it would be more than that, but I suppose any increase is an improvement. On top of that, they also found those using the Level made the same number of typing errors as workers who were sitting, so they don’t seem to adversely affect your work performance.

Still, if you like your chair, or just prefer to work without doing gymnastics at the same time, you can derive the same benefits you get from standing by taking a few minute break each hour to walk around and stretch your legs a bit.

If you are curious how it works, here’s a look at the Level in action. If you try one, let me know what you think.