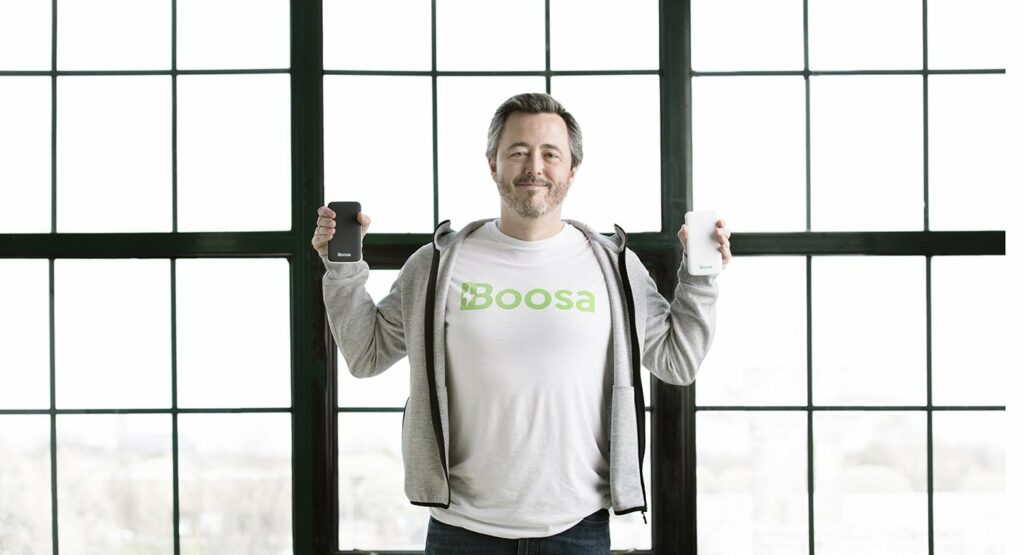 These days nearly everyone we live with, work with, or randomly encounter throughout our day has a mobile phone. We use them to do business, to maintain our calendars, for email, to take pictures and videos, to keep up with our social media and even occasionally to make calls! As such integrated parts of our lives, we rely on our phones to always be working- that is, we count on their batteries to never let us down. We’ve all experienced the dreaded “Low Battery!” alert at inopportune times. What can you do to prevent it happening and ruining your day?

Chris Reimer, friend to OE, author, Director of Creative Services at Maryville University, and now entrepreneur, took matters into his own hands and started his own company, BOOSA TECH. BOOSA is a portable power device designed exclusively to keep your mobile phone charged and ready for whatever your day brings.

We had the chance to speak to Chris about BOOSA TECH, and I asked Chris to speak a little on why we have such a need for something like BOOSA in our lives:

Chris Reimer: “As a marketer, I’m just always burning both of my phones (work & personal) down to zero pretty much every day. When you think about what our phones provide us, even if you’re not a marketer, everything from finding our way with maps to the ability to board an airplane, to mobile payments, voice recording, not to mention phone calls, social media, email- we can make art on them- it’s just so amazing the things we can do with our phones. They provide a connection to the things we love, our families, photography, your work, and it’s just a necessity to be able to stay online.”

“So, to be able to do my work and not have to worry whether it’s new and the battery is strong and you’re still burning the battery down because you use it all day OR you’ve already got your 300 cycles in on your battery and it’s just not what it used to be. Low battery anxiety is a real thing for people. You can pay $1000 for your phone so why not spend an extra $33 with BOOSA and really never, ever have to worry about a dead phone again.”

Chris had a wonderful, real-life example of putting the BOOSA to use:

Chris Reimer: “Tonight, I’m doing a Facebook Live here at work for a veterans event we have on campus where we’re going to have representatives from several large companies who are veterans come in and speak about tips on finding jobs when they come back to the States and want to re-enter the workforce. We can put it on Facebook Live and instantly share it with veterans all over the country, but I’m going to be doing a live video for two hours, and that could burn my phone down. So, my phone’s going to be on a tripod and BOOSA will be taped to that tripod and I’ll be live the whole two hours and nothing’s going to happen to my phone and I’ll finish at 100% battery!”

Knowing there were many portable charging devices already in the marketplace, Chris really focused on finding something that had all the features important to him to set it apart from the competition. One thing I really liked about it is BOOSA is not big and bulky (it’s about the same size as your phone) so it’s easy to carry alongside your device and BOOSA starts itself when you plug in, which can be a lifesaver:

Chris Reimer: “So for instance, when you plug in the thing [your phone] turns itself on, then people forget to turn on their power banks and they go back later and nothing happened and their phones are actually down. That is incredibly frustrating. It’s literally a design flaw. Some turn themselves on and some don’t. Some have USB-C and some don’t, some are relatively good looking and others completely ugly. I’m not an inventor, I just wanted to create one that would try to include the best of everything and the worst of nothing. The USB-C port is really important. It doubles as an output, but it’s also an input, you can use it to charge the BOOSA itself.”

Finally, we joked a bit about the fact so many portable charging devices have, among varying numbers of USB ports (and sometimes USB-C ports) a flashlight! Maybe your lights go off when your phone battery runs out? I don’t know, but it’s very common and Chris actually had a very practical reason why BOOSA does NOT have one:

Chris Reimer:“What happens in a lot of people’s bags, you throw your power bank in and the flashlight accidentally turns on and burns the power down, which is bad, not to mention, they can never put one on a portable charger that’s remotely as bright as the one on your phone. We have older ones at home, goodness knows who made them, and they might get used as flashlights but not as power packs. It’s not bad, it’s just a matter of “what is the point?” For me, typically, I’ll ask the question, what’s the point of this? Why is this here? So when we’re thinking of design or use scenarios there has to be a reason for it to be there. Anytime someone is going to be using a flashlight either around the house, or you know, like the 21st-century version of putting your lighter up at a concert or whenever, you’re going to use your phone. So, we’re not going to have a flashlight on BOOSA.”

There you have it, no useless feature on BOOSA, and you can see it in all its glory, along with a ton of wonderful video FAQ answers on the BOOSA TECH website: https://boosatech.com/

About the author: Greg Bussmann is a Marketing Specialist at Office Essentials. He is a lifelong, proud St. Louisan, a technology enthusiast, husband, and father to four daughters and three dogs. He enjoys watching the St. Louis Cardinals and Blues. Email Greg anytime.

Next post: Jimmy Choo to Jimmy’s Poo; The wonderful world of Office Odors!

Previous post: How to Get Permanent Marker Off of a Dry Erase Board