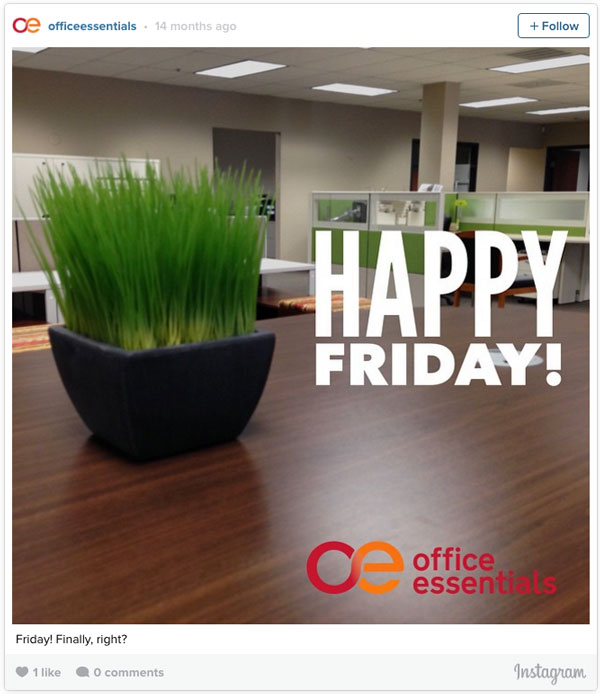 Happy Friday! Here are a few interesting items we found this week that you can use to drop some knowledge on your co-workers during your next coffee break:

The St. Louis Cardinals attendance tops 3 million…again — Just as the team wrapped up another National League Central Division Championship, Office Essentials wrapped up our first year of sponsoring the St. Louis Cardinals. This week we learned that our digital sign at the ballpark was seen by 7 million eyeballs! The Cardinals announced that total attendance at Busch Stadium this season was 3,520,889, the 12th season in a row in which the team’s attendance has topped 3 million. According to data released by the Cardinals, the team sold out 37 games and average attendance per game was 43,468 fans. The Cardinals had the second highest total attendance in Major League Baseball, according to data from ESPN. Only the L.A. Dodgers, with total attendance of 3,624,036, ranked higher.

Part traveling exhibition and part exhibition created by the Missouri History Museum, Coffee presents a unique experience for museum visitors. Roughly one third of the overall exhibit space consists of Coffee: The World in Your Cup, a traveling exhibition organized by the Burke Museum of Natural History and Culture in Seattle. The St. Louis in Your Cup portion of the exhibition, which encompasses the majority of the exhibit space, was researched and prepared by the Missouri History Museum staff, drawing from the organization’s own collection. Together, these two stories make up the 6,000 square foot exhibition that is Coffee: The World in Your Cup & St. Louis in Your Cup.

There are some cool, and free, opening weekend events on Sunday October 4. Check them out here.

Speaking of Coffee — here are 16 facts about coffee you may not know from Mental Floss. For example, did you know it would take over 70 cups of coffee to kill a 150-pound person? Check the rest of them out and wow your coworkers with your knowledge of useless facts.

About Greg Bussmann 335 Articles
Greg Bussmann is a Marketing Specialist at Office Essentials. He is a lifelong, proud St. Louisan, a technology enthusiast, and father to four teenage daughters. He spends his spare time providing rides, chaperoning dates and trying to keep track of his credit cards. He also enjoys watching the St. Louis Cardinals when it's his turn to use the remote. Email Greg anytime.
Facebook Instagram Twitter LinkedIn

Here’s what we’re reading this morning Computers Are Probably Making Us Nearsighted – Entrepreneur.com How to manage chronic information overload in the modern workplace – Quartz Eliminate the Online Distractions in Your Life – ChrisReimer.com Here’s What We’re Getting Wrong About the Modern Office – Huffington Post Woman Sues Her Employer For Firing Her After She Disabled 24/7 Monitoring App – Naked Security

Here’s what we’re reading this morning 6 email mistakes killing your career 6 Surefire Ways to Eliminate Stress During the Workday | Inc.com Study Finds Half Of Americans Work More Than 40 Hours – AskMen Why female bosses make you more engaged at the office | Deseret News National Healthy Office Snacks That Increase Your Productivity Why Executives Should Stop Quitting To Find Work-Life Balance

Here’s what we’re reading this morning It’s Not Just You: Work-Life Balance Is Getting Harder – Inc.com What it Takes to Do Work That Matters — Shawn Blanc 5 Office Design Strategies That Will Make Employees Happier – Fast Company Daily habits to make yourself smarter – Business Insider How to Take Better Coffee Photos – The Phoblographer