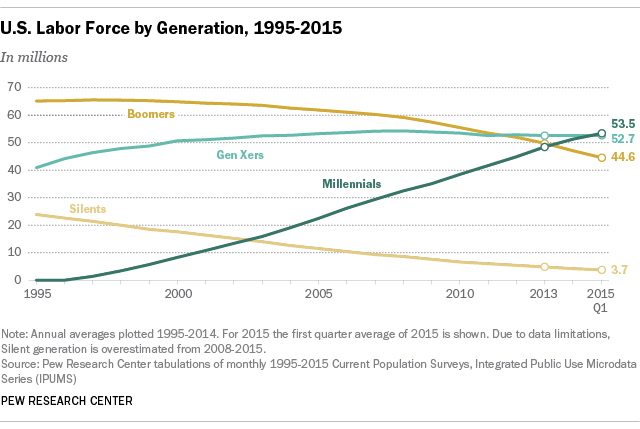 More than one-in-three American workers today are Millennials (adults ages 18 to 34 in 2015), and this year they surpassed Generation X to become the largest share of the American workforce, according to new Pew Research Center analysis of U.S. Census Bureau data.

This milestone occurred in the first quarter of 2015, as the 53.5 million-strong Millennial workforce has risen rapidly. The Millennial labor force had last year surpassed that of the Baby Boom, which has declined as Boomers retire.

So what does this mean for the future of the workplace? Experts don’t really agree on that, so it is hard to say for sure. Some say they are apt to change jobs more often, and demand more from their employers, while others say they are more like previous generations than anyone would like to admit.

Either way, it seems likely that a lot of the trends we are seeing now, like greater emphasis on workplace wellness (sitting is the new smoking, for example) and sustainability will only continue to gather momentum.